Chats with the Dead 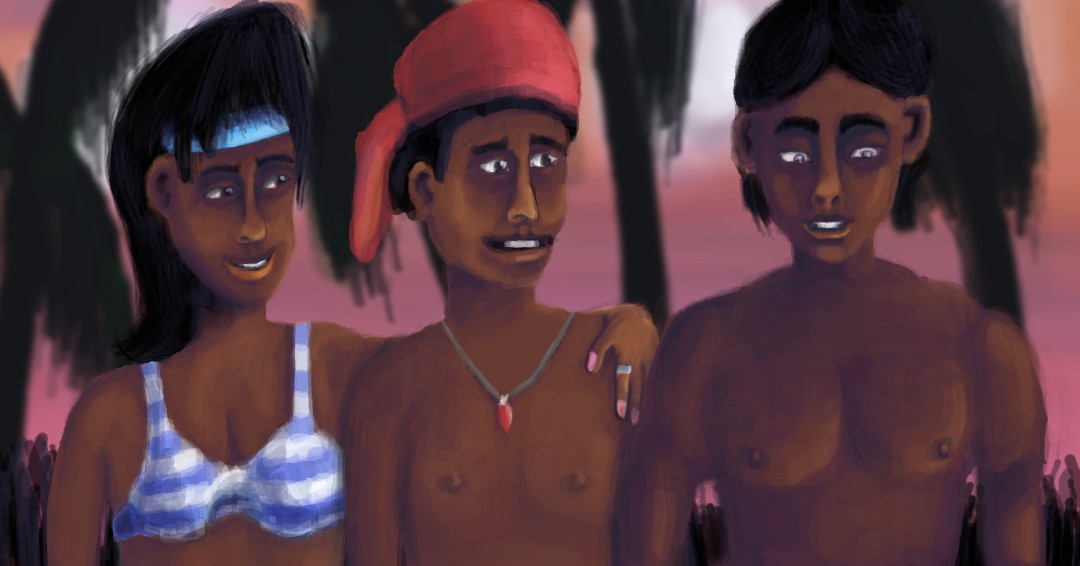 Jaki, Maali, and DD on one of their vacations Down South circa late 1980s.

I finished Shehan Karunatilaka's Chats with the Dead last week, and it was incredible. As Thimal puts it about Jaki, "how can a character say so little but still be so amazing?".

This Krita piece took all day to finish, and could still do with more polish... but I'm sleepy.

I have been fascinated with Sri Lanka in the 80s. It was, in my reading, a bookend in history, ending the bell-bottomed idealism 60s and 70s, and dawning Sri Lanka into the horrors of war and insurrection... a history that would grow even more violent well into the 90s and 00s. What little scraps I could find of its written history I would mop up, because these things were never taught at school and never discussed by the elders (who'd much rather forget).

While Maali (and his privileged set of friends) is the canvas through which we explore this reality, it is really a story of all that we lost; the young family that mourns their murdered university lecturer/human rights advocate mother, the families that left everything behind and ran-and still didn't make it, the thousands of kids who disappeared overnight because their political leanings were suspect.

Chats with the Dead is a start of a conversation that Sri Lanka has to have regarding its past. It has been 30+ years since the brutal end of the Second JVP Insurrection, and books like these and films like Visakesa Chandrasekaram's Paangshu serve as an important bridge that passes on these lessons (and the fact that justice was never done) to a younger generation.

P.S. I have been a fan of Shehan's since Chinaman, and I think this is a worthy successor. Other than touching on conflict and race relations though, I think the books have little in common, and that's a good thing. Chats with the Dead should be judged on its own merits as a standalone book.