My take on doing 'Clean Architecture' in React (Part 1)

Friendship is magic? Wait till you see Dependency Inversion! 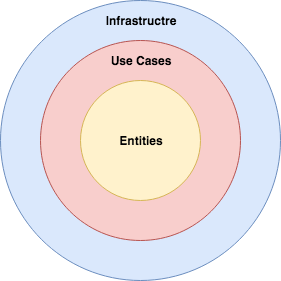 I'm a huge fan of Robert C. Martin's work in general, and Clean Architecture in particular. I'm frequently on the lookout for how to apply it to the different system architectures and frameworks we work with.

It's a damn shame that most of the code we are told to write in guides and documentation (often written by people who are heavily invested in the framework that the docs are about) are very tightly coupled to the framework, libraries, and persistence implementation (as well as the REST APIs that are called—how many of us have had to do system-wide changes because the response object from the API changed?)

Today, in part 1 of a 2 part series, I'll write a bit about what I think is a good way to implement Clean Architecture in React JS and React Native apps1.

The advantages of switching to Clean Architecture are listed out in detail on Uncle Bob's blog, but I am going for three main objectives with regards to having this architecture on our React app:

Keep in mind that one of the most important fundamentals of Clean Architecture is to recognise where your architectural boundaries are, and to ensure that calls across those boundaries are done using well defined interfaces and contracts. The response object changing does not change the contract, since the core sets the contract and the code that calls the API and parses its responses merely implements it. Your DTO is changing? It's up to the API component to massage that into the existing domain entity, sorry. 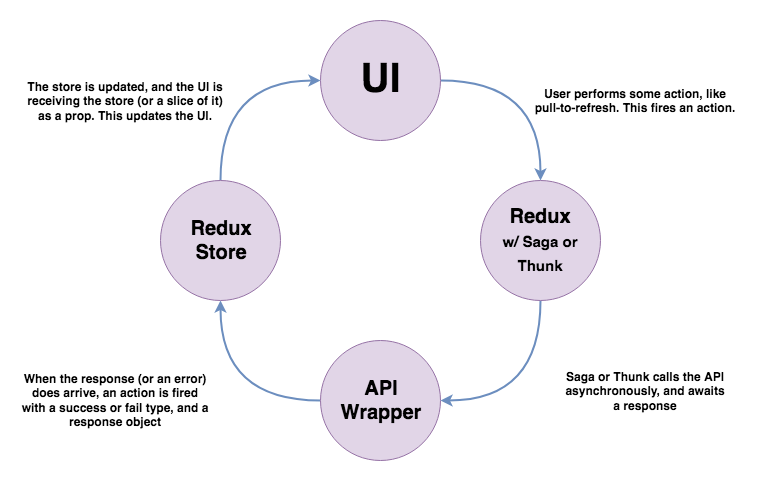 Okay, so this a very standard and common pattern when writing the most common kind of interface, i.e. call an API, display some data in a component. You could be using Redux for state, or React hooks, or component state, but this diagram barely changes because in essence the user performs an action, which results in an API call, which updates the state and hence the UI.

It'll be hooked up to Redux using something like this:

And I'd guess your Thunk (or Saga) would look a bit like this:

Now, I would like to start off by saying it would be unwise to try to break React and whatever state management solution you use using Clean Architecture. Yes, it's good to keep them isolated but I'd suggest using React patterns such as presentational components and containers to do that—this is because Redux and the ilk are tightly tied to React's Context API, and it would be a massive hassle to handle all that complexity and coupling in our core. So let's keep it out.

I'm thinking of having 3 major components:

The component diagram, in my head, looks a bit like this: 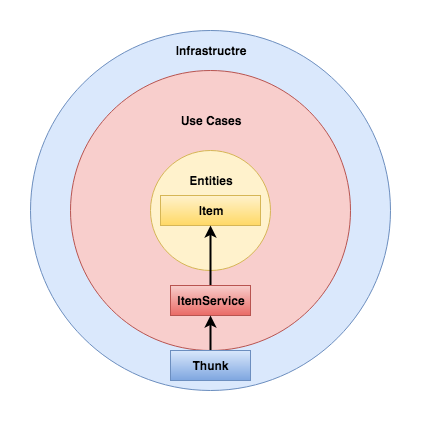 But wait, where's are we calling the API and getting the data for items? We need to include an ItemRepository interface, and an implementation for it. 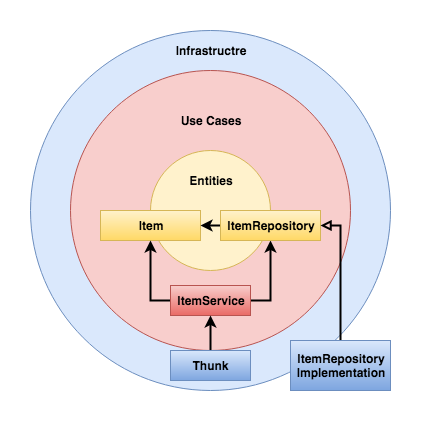 This is one of the coolest things about Dependency Inversion, in that all the arrows are flowing inwards. In this case, ItemService depends on the interface ItemRepository—which is in the Entity layer—and not on its concrete implementation which is on a lower layer and will only be injected during runtime. This has several benefits, which we'll explore in the next part.

The overriding rule that makes this architecture work is The Dependency Rule. This rule says that source code dependencies can only point inwards. Nothing in an inner circle can know anything at all about something in an outer circle. In particular, the name of something declared in an outer circle must not be mentioned by the code in the an inner circle. That includes, functions, classes. variables, or any other named software entity.

The full code for this part can be found on Github.