I promised previously to use this space for link sharing as well, so here goes the first instalment.

Gender disparity in computer science is an often discussed topic, and the following is one of my favourite graphs on the topic: 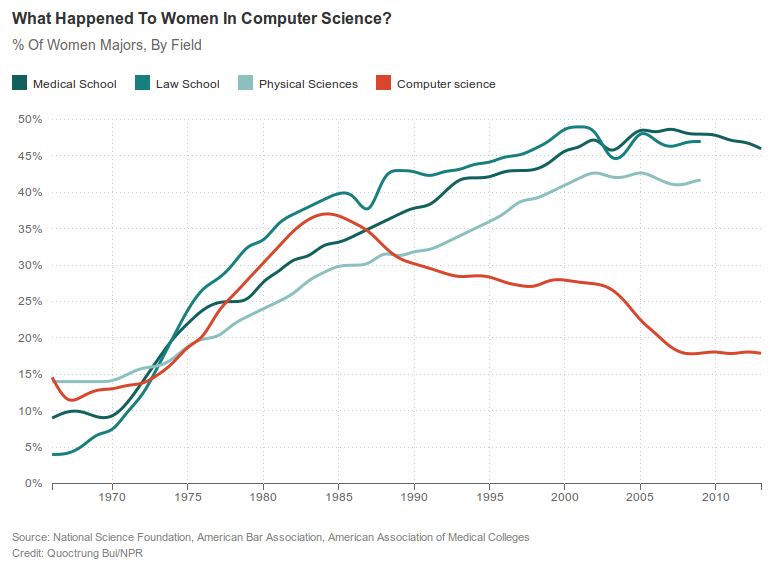 This week, I read about another study that confirms that software development is not the meritocracy it is often claimed to be. - "Women considered better coders – but only if they hide their gender"

The researchers looked at approximately 3m pull requests submitted on GitHub, and found that code written by women was approved at a higher rate (78.6%) than code written by men (74.6%).

It was here that they made the disturbing discovery: women’s work was more likely to be accepted than men’s, unless “their gender is identifiable”, in which case the acceptance rate was worse than men’s.

Jenny Bryan, a professor of statistics at the University of British Columbia, uses GitHub as a teacher and developer in R, a programming language. Her profile makes clear that she is a woman, and she doesn’t believe that she’s been discriminated against due to her gender.

“At the very most, men who don’t know me sometimes explain things to me that I likely understand better than they do,” she writes. “The men I interact with in the R community on GitHub know me and, if my genderhas any effect at all, I feel they go out of their way to support my efforts to learn and make more contributions.”

Trust Githubbers to attempt mansplaining R to a Stats Prof.

Machine Learning is a topic I am ostensibly interested in. This week, I discovered a really cool awesome-style list with a ton of ML resources.

A beautiful, beautiful tool and write-up by Dr. Martin O'Leary of Swansea University on how to generate imaginary maps and a companion piece on generating an imginary language to produce place names. Mind-blown twice: as a cartography nerd AND as someone who studied NLP. 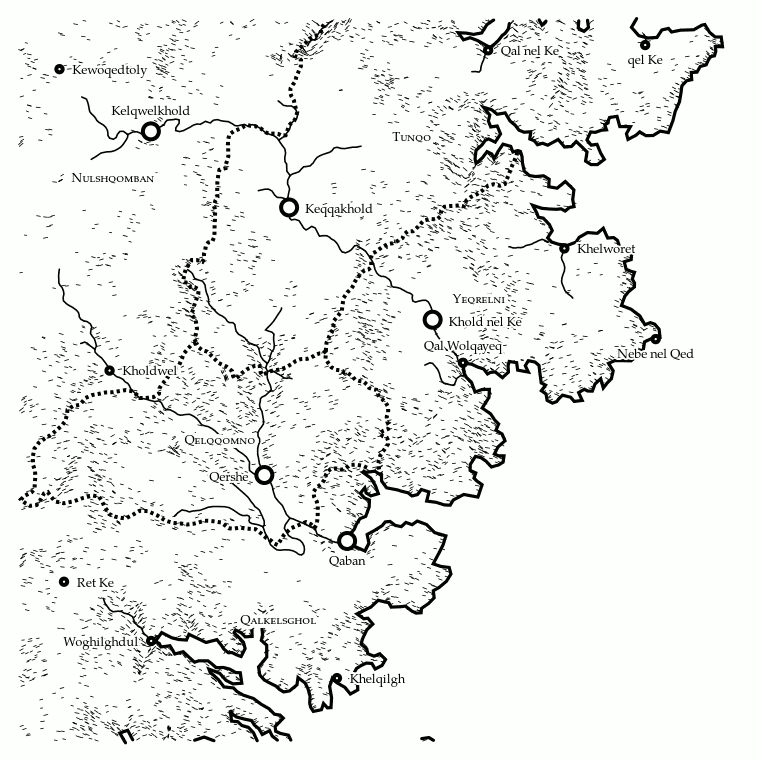 I wanted to make maps that look like something you'd find at the back of one of the cheap paperback fantasy novels of my youth. I always had a fascination with these imagined worlds, which were often much more interesting than whatever luke-warm sub-Tolkien tale they were attached to.

Took me back to my childhood spent looking for, devouring and creating imaginary maps of my own.

A beautifully visual and data-rich NYT piece on how different countries dominated different arenas of the Olympics over the years, and how certain blocks dominate certain sports. Part of their excellent Olympic coverage.

Andrew Fernando's excellent write-up on the first day of the third test between Australia and Sri Lanka at the SSC. He keeps churning out these exceptional gems that make me proud to be Sri Lankan.

The SSC ground happens to be in the clotted heart of Colombo's administrative district. Yet, although the Australia team may never set foot inside the National Identity Card Centre, which is a few minutes away, or the Ministry of Public Administration and Management, which is visible from the ground, they were on day one of this Test, given a thorough government-office treatment. They were made to wait for hours, run around, given brief hope, which was promptly crushed; they were sneered at, and mistreated, and by the end of the day, they were ready to tear their hair out.

Bureaucrat-in-chief for Sri Lanka was Dhananjaya de Silva, whose maiden Test hundred was a thing of superlative casualness. So unfazed was he by a scoreline of 26 for 5 at his arrival, he was like the civil servant who comes to work to find a queue stretching around the building outside his office, yet before work takes a long tea-and-biscuit break while chit-chatting to colleagues. He stood slouched at the crease all day, unfurling somnolent drives, and languid flicks to the leg side, appearing as if he was doing almost nothing. Meanwhile, Australia chased leather all over; patrons shunted from room to room to room in the building, all, in the end, for no tangible reward.

Col. Sylvester Perera's sobering account of the civil war in the 90s, and how lasting peace is yet to be achieved.

Operation Riviresa was one of the major operations conducted by Sri Lanka's armed forces against the LTTE, and it was both well-planned and well-coordinated. The primary objective of the operation was the capture and liberation of the town of Jaffna and the rest of the Jaffna peninsula. By contrast, during Operation Sath Jaya to capture the LTTE stronghold of Kilinochchi, the country's political leadership overrode the advice of military commanders and drove the army to stretch its forces beyond the practical limits of defense.

[...] the intelligence provided to the military lacked answers to the vital questions of when, where, what, and how—the most fundamental aspects of a useful intelligence picture. As a result, our operations either were ineffective or became nightmares of shock and surprise for our troops.

I realized that defeating an insurgency does not bring the conflict to a conclusive end. I had to put all my efforts into managing a post-conflict society for peace building, within a framework called disarmament, demobilization, and reintegration. Despite all our work, however, it seems that Sri Lanka is still facing these challenges [...]

D. B. S. Jeyaraj's article "Shelton Ranaraja: Principled Politician was Conscience-Keeper of the Nation" which contained some chilling excerpts from William Mcgowan's “Only man is Vile”.

The Kandyan jungle seemed so at peace just after dawn on that October morning in 1989. In the twisted thicket of palms, bamboo and bougainvillea that blanketed the hotel, a handful of iridescent parrots screeched cheery greetings to the first rays of sun as they splintered into a forest of prisms through the morning dew [...] But we turned left that morning, and we hadn’t driven even a mile when we saw our first body–a headless corpse, hands bound behind its back, blocking the road like a fallen tree. A few hundred yards farther, there were three more, then two more, then four more, all with their heads neatly severed at the shoulders.

Mr. Ranaraja expressed what I imagine a lot of people must've felt at that time:

That night, in his modest home near the Temple of the Sacred Relic in downtown Kandy, one of the island’s parliamentarians spoke with quiet frustration of the trauma that this awful era has caused his island paradise and its 14 million people–“We wake up in the morning, and we know tomorrow will be worse than today”–and he tried to square the living death with the religion that had taught them from birth the sacredness of all life.

“We’re not to kill even an animal or an ant,” Shelton Ranaraja said that evening, his body shaken and broken from the horrors that abounded in the peaceful jungle around him. “I don’t understand why this is happening. I cannot explain it.”

So, that was a long write (and read, sorry!). I should try to keep these shorter from next time on.