Yesterday, there I was, minding my own business, when Facebook "memories" or whatever threw this curveball at me: 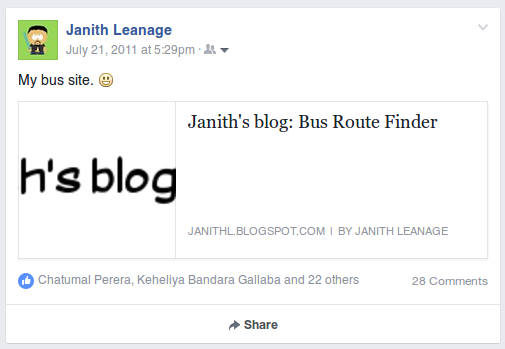 Turns out it was exactly 5 years ago that I hacked together a small piece of PHP, with a liberal amount of SQL logic thrown in, and it became sort of popular. We're talking a codebase like this:

Anyway, this was hosted on a shitty 000a host that somehow still exists on the internet, and it looked like this:

Which somehow is better looking than anything I've managed since.

I've been wanting to rewrite this thing in JS since 2014, and I've been grappling with Dijkstra's algorithm for months over this. The moment of clarity was realising that bus routes aren't graphs, they're linked lists, and using complicated graph algorithms is unnecessary.

This Facebook reminder yesterday and having a bit of free time on my hands led to a 24-hour code sprint that produced this little thingy.

It's not better than the original, for example the same query as the above Galle Face - Kottawa one gives a stupid result like this:

What is this CRAP?!

Update: The UI code is now completely React-based! All clean and beautiful. Yay!

"Janith", I hear you say, "you go around the place talking about the how great React is and how important readable code is, and then you write crap UI code like this:"

Okay, I'm a hypocrite. I only had 24 hours to write this and I cut some corners. REACT TAKES LIKE 6 HOURS TO SET UP, OKAY?

(It took a couple of days of hard toil to finally convert the UI code to React. I would never have made my self-imposed 24 hour deadline had I gone with React the first time.)

Why's half of router.js stolen code?

Let's face it, we all do this. Copy stuff gedi pitin from StackOverflow. I just linked back to the sources, legal ramifications be damned.

Is this bus thing the only good thing you've written? Are you flogging a dead horse?

I wouldn't call it good, but yes.

I've barely tested it, so I'll probably make some tweaks here and there. The code, as usual, is on Github and MIT licensed.

Go to this page, and it'll throw you not great bus route suggestions